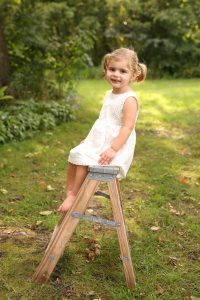 ​The U’s 800th heart transplant recipient and her family return to normal life
By Karin Miller
Summer Ostlund is a busy baby who always has a smile on her face. Like most 1-year-olds, she is on the move, crawling and pulling herself up, playing with her sister, and making her family laugh. But the last year has been a test of Summer’s strength.

In January 2014, Summer became the 800th person—and one of the youngest ever—to receive a heart transplant in the University of Minnesota’s history.

Just a couple of months before that, in November 2013, it appeared that 2-month-old Summer had caught older sister Vera’s cold. Parents Tom and Tori Ostlund brought Summer to her pediatrician, who was worried about her heavy breathing and lack of weight gain. A chest X-ray quickly revealed a severely enlarged heart.

Within the hour, the Ostlunds were sent to the emergency department at University of Minnesota Masonic Children’s Hospital, then the cardiovascular intensive care unit, where Summer was diagnosed with idiopathic dilated cardiomyopathy. Summer’s parents were told that she needed to be placed on the heart transplant list at the highest priority. It felt surreal.

“We, like most parents, never dreamed we would be in a fight for a child’s life. The gravity of this is starting to become more clear,” the Ostlunds wrote on Summer’s CaringBridge page the day after her diagnosis.

​Over the next several months, Summer bravely endured four open-heart surgeries, including a 10-hour operation to implant a Berlin Heart EXCOR® pediatric ventricular assist device, an external machine designed to keep kids’ hearts strong until a donor heart becomes available. The device has FDA approval for pediatric use at only a small number of hospitals in the United States.

“The Berlin Heart saved Summer’s life,” says Tom Ostlund. “Without it, Summer may not have survived to a transplant. It afforded … her surgeon time to wait for the perfect heart.”

In January, that perfect heart arrived. Some 14 hours after Summer’s parents watched her be wheeled off to the operating room, still with a smile on her face, she returned to them with the greatest gift of all—a new heart. In late February, Summer was cleared to go home.

​Since then, the Ostlunds have fallen into many new routines dedicated to Summer’s ongoing health and are enjoying life together again as a family. While the return trips to the hospital are many, they are happy to see the nurses, doctors, and staff who helped to save Summer’s life.

So thankful is the whole family that grandparents Rich and Mary Ostlund have established the Summer’s Wish Pediatric Cardiology Innovators Fund to support University of Minnesota Masonic Children’s Hospital. Tom and Tori also have found great happiness and purpose in raising money for Summer’s fund.

“After her transplant, it seemed like so little to just say ‘thank you,’” says Tori Ostlund.

While the long-term outlook for pediatric heart transplant recipients is continually getting brighter, there is still plenty of room for improvement.

“Hearts are a very precious resource,” says Tom Ostlund. “Any research that can lead to innovation and improved outcomes is worth striving for as a community.”
Donate Now