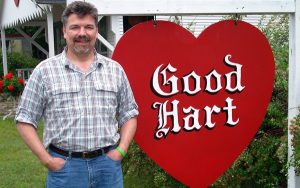 Joel’s Story
Joel Heckman used to run a 5K during his lunch hour. After sarcoidosis attacked his heart and lungs, he struggled just to walk across a small room.

Joel’s experience with sarcoidosis is in some ways a study of contrasts for the former Centennial Lakes Police Department police chief. The disease ravaged more than a third of his heart. After a lengthy medical journey, he received a heart transplant in 2009 at University of Minnesota Medical Center.

“I was healthy—and then I was sick. For someone who had made a career of service and protection, this was such a dramatic change. From saving others, to needing to be saved myself,” Joel said.

While serving as a chief of police for the Centennial Lakes Police Department, Joel noticed he was becoming unusually short-of-breath during his regular lunch hour run. An exploratory computed tomography (CT) scan showed scarring and nodules in Joel’s lungs, an inflamed spleen and inflamed lymph nodes. In January 2004, a local specialist diagnosed him with sarcoidosis. The autoimmune disease produces inflammation, most commonly in the lungs, which can then lead to scarring.

But two months later, Joel’s disease took a frightening turn when he experienced severe shortness of breath while climbing up a stopped escalator at a car show.

“My wife thought I was having a heart attack. I knew I wasn’t; I just couldn’t breathe.”

Back in the hospital, specialists confirmed the presence of sarcoidosis in Joel’s lungs, but it wasn’t enough to explain his severe shortness of breath. He was referred to a local cardiologist. On his first visit, the specialist told Joel the disease had entered his heart and was slowly converting portions of the heart muscle into non-functional scar tissue. This development caused an imbalance in his heartbeat; during a treadmill test, Joel’s atria beat at 160 beats per minute, while his ventricles, affected by sarcoidosis, pumped at 34 beats per minute. The specialist recommended a pacemaker to help control the heart muscle.

But the disease continued to progress and wreak havoc in Joel’s heart. In 2007, tests at Mayo Clinic revealed that 30 percent of Joel’s heart had been rendered useless scar tissue by the disease. In November 2007, the specialist told Joel he would soon need a heart transplant.

“Like a cell phone battery charge at 70 percent, my heart muscle was at 70 percent and was losing power fast,” Joel said.
“God has a purpose for me to be here.”

Given the option to have his heart transplant at Mayo Clinic or through University of Minnesota Health, Joel opted for UMN Health. In January 2008, he went through a week-long transplant evaluation. To buy time, Cardiovascular Surgeon Ranjit John, MD, and a care team implanted a left ventricular assist device (LVAD) in Joel.

“Receiving the precious gift of a second chance at life because of the unselfish gift of my donor and my donor’s family is wonderful,” Joel said. “I had the total A-Team here at University of Minnesota Health.”

With a healthy heart, Joel has returned to his life of community service. He volunteers as an ambassador at organ procurement organization LifeSource, as a police chaplain and at his church. He also helps at Second Chance for Life Foundation, where he counsels fellow transplant patients in a support group.

Joel was the 670th University of Minnesota Health heart transplant recipient—a number he commemorated on a personalized license plate: “UMHT670.”

“I just feel like God has a purpose for me to be here. I appreciate that, and I want to make sure that I give back everything I can,” Joel said.