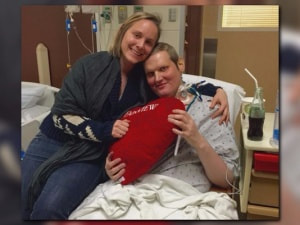 Growing up, the specter of heart disease was always something I was aware of. At age 29, before I was born, my father had a successful heart transplant. On May 13th, 1983, he became the 19th heart transplant recipient at the University of Minnesota. As a precaution, during childhood I was given a full heart health checkup every several years. The consensus: I hadn’t inherited the gene that led to my father’s cardiomyopathy.

My father would go on to live 20 years with his new heart, leading a completely normal, healthy life until he passed away peacefully from cardiac complications.

Throughout my childhood, high school, and college, I was always active, playing football, tennis, and weightlifting. In my mid-20’s I took up distance running. I was the pinnacle of health. After undergrad, I moved to Egypt, first to teach English, then to get my master’s and work as a journalist covering the ongoing political unrest. I successfully began a career, and thrived in my new position.

When I was 26, I noticed that my stamina wasn’t what it used to be. At first, it only affected my workouts. I couldn’t run as far or lift as much weight. I chalked it up to stress, bad eating habits, Cairo’s thick pollution. But within several months, daily activities like walking my dog and cleaning the house started to become increasingly strenuous. It all came to a head after a week-long bout of coughing which landed me in the doctor’s office. An EKG and an echocardiogram soon showed that I had inherited congenital heart disease.

Still in Egypt, I was prescribed the standard medications: beta blockers, ace inhibitors, and diuretics. My health soon started to improve and I felt strong for the first time in a year. Unfortunately, a case of pneumonia six months after my initial diagnosis of heart disease proved too much for my system to handle and I was forced to return home, to Superior, Wisconsin, to receive treatment.

Back stateside, treatment including a pacemaker and cardioversion proved to be ineffective, and my health continued to deteriorate. Suffering from right-sided heart failure, a left ventricle assist device was deemed risky at best, dangerous at worst. I was referred to the transplant team at the U of M, and within three weeks of my first appointment with Dr. Thennappen, I was in the hospital and status 1A on the recipient list.

In the hospital as an inpatient, my water weight grew and my condition became critical. After four months, I was in rough shape in the ICU with a balloon pump in my right leg, and my vitals failing. Then, on in mid-February 2016, after six months in the hospital, they found a match, and I got my new heart on Valentine’s Day!

I practically improved overnight, and after a lot a rehab and a lot of great care from the U of M nurses and doctors, I was home 11 days after my transplant. I was inspired by my new lease on life, and made sure to live it to the fullest. Three weeks after being discharged I proposed to my girlfriend. Four months after my transplant she became my wife. I have nearly made a fully recovery one year on. This year, my first year with a new heart, I have traveled internationally, continued working as a journalist, and began running again.

I couldn’t have accomplished any of this without the support from the tremendous staff at the University of Minnesota, my loyal family and friends, the community, fellow transplant survivors, and most importantly the generous young man who decided to the most selfless thing possible and donate his organs.
Donate Now