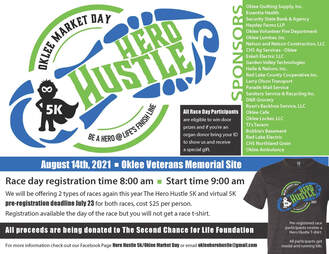 ​
In the small northwestern Minnesota town of Oklee, population 435, a long five-hour drive from the University of Minnesota Medical Center in Minneapolis, countless lives have been forever changed for the better by the actions of one transplant recipient and his family.

Bob Carriere suffered from heart disease for over 20 years and needed his first bypass surgery at the age of 39 in 1995. Ensuing years brought many more heart surgeries including the placement of 9 different stents. In November of 2016, his heart disease had progressed to a point where he needed to be airlifted to Minneapolis to wait in the hospital for a transplant, finally receiving his new heart two months later, on January 15, 2017, as heart number 877. 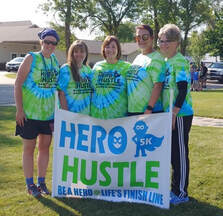 ​The family was deeply touched by the care provided by the hospital staff and the outreach from members of Second Chance during Bob’s inpatient stay waiting for a new heart. Tracy Vandenberg, the president of Second Chance at the time, stopped by Bob’s hospital room frequently to check in with the family, even taking family members out to lunch or shopping to give them a break. Nurses were also thoughtful in helping the family through the crisis and went the extra mile by showing Bob’s young grandchildren around the hospital and giving them a stethoscope to practice listening to heart beats. 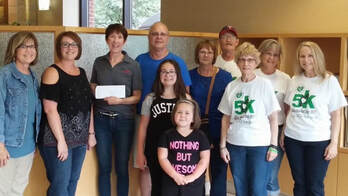 ​To express their gratitude for the gift of life that Bob had received, Tracy Hamm, Bob’s daughter, along with several other members of the Oklee community created the Hero Hustle 5k as an event to increase awareness of the need for organ, eye and tissue donors. And in recognition of the compassionate support Bob and his family received during his transplant journey, proceeds from the event have been donated each year to Second Chance. 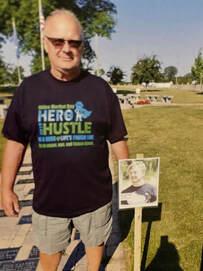 ​The Hero Hustle 5k was first held in August of 2017 and has taken place
each of the last four years. It is sponsored by local businesses and draws nearly 100 participants. Runners are encouraged to wear superhero costumes to symbolize the amazing heroes that save lives through organ donation. Despite the many obstacles presented this past summer during Covid-19, holding the event was so important to the community that it was creatively restructured so that entrants could safely race virtually.

A Hero Walk is set up each year on race day featuring photos of local donor families and transplant recipients together with facts about organ donation. Attending the second year in 2018 were the donor parents of Bob’s heart. It was the first time his donor family and Bob had met and the parents were able to listen to the heartbeat of their son. The race last year was dedicated to a 4-month-old girl from a nearby town who had also received a life-saving heart transplant. She was named Hero of The Day and part of the race proceeds were given to her family.

Bob and his family extend a big thanks to Second Chance for all that its members do to support heart transplant patients. The family wants to acknowledge that the work and dedication of Second Chance means a lot to everyone going through the transplant process.

The Hero Hustle 5k truly is an inspirational story of how one family can make a positive impact in the lives of many others.  Second Chance also extends a warm thank you to Bob Carriere, his family and the Hero Hustle Committee for creating the annual event and for all their selfless efforts to overcome challenges and make it successful. The proceeds raised and donated to Second Chance assist us in our mission of supporting patients before and after transplantation.

The Hero Hustle 5k will be held again in August of 2021. Entrants will again be allowed to race virtually so that participation around the area and the state can be encouraged. For more information about the race, including amazing heartwarming photos and videos, please visit their Facebook page at Hero Hustle 5K/Oklee Market Day. A link to that page is provided below.​
​
Hero Hustle 5K/ Oklee Market Day
Donate Now